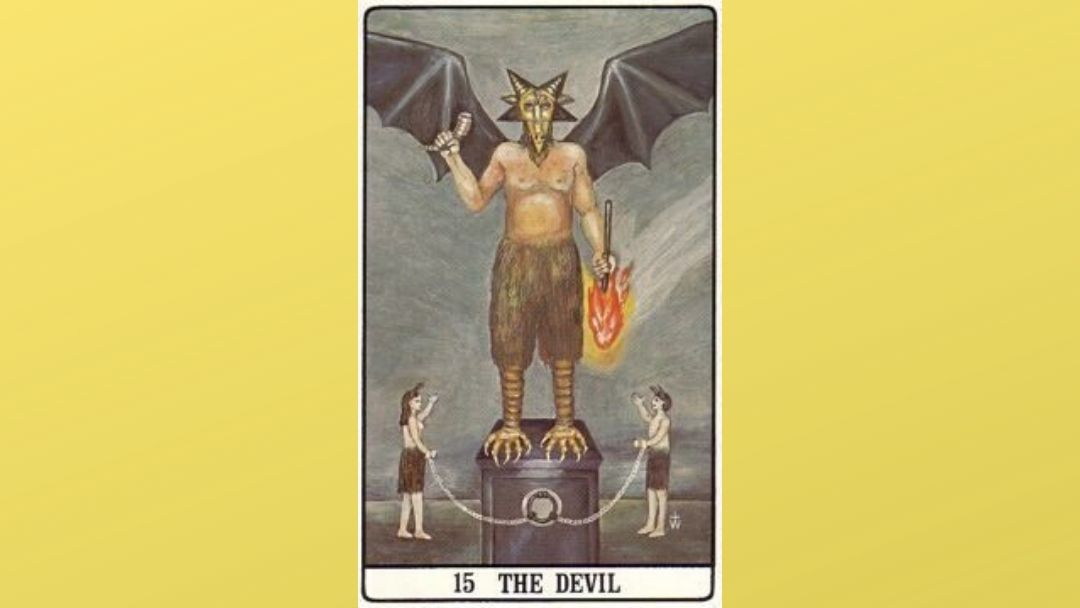 Divinatory Meanings of The Devil

Attributes of The Devil

Golden Dawn Title of The Devil

Lord of the Gates of Matter, Child of the Forces of Time

Golden Dawn description of The Devil

The fifteenth Key of tle Tarot represents a goat-headed, satyr-like Demon whose legs are hairy – his feet claws, sianding upon the Cubical Altar. He has heavy bat like wings. In his h$t hand, which points downwards he holds a lighted torch and in his right, which is elevated, a horn of water. The left hand points downwards to show that it is the infernal and burning, not the celestial and life giving flame which is kindled at his forch – just as when the Sun is in Capricorn, to which cold and earthy Sign this Key correspmds. Solar Light at its weakest and the natures of cold and moisture triumph over heat and dryness”

“The Cubical Altar represents the Universe, right and left of it, bound thereto by a cord attached to a circle which typifies the centre of the Earth, are two smaller demons, one male and one female. They hold a cord in their hands. The whole figure shoua the gross generative powers of nature an the material plane and is analogous to the Pan of the Greeks and the Egyptian Goat of Mendes (the symbol of Chem.). In certain ways this Key represents the brutal forces of nature, which to the unbelieving man only obscure and do not reflect the Luminous Countenance of God. It also alludes to the sexual powers of natural generation. Thus, therefore, the Key fitly counter-balances the symbol of Death on the other side of Tree of Life.

Of the smaller demons, one points downwards and the other upwards, answering to the positions of tlw hands of the central Figure. Beneath his feet are Pentagrams on whch he tramples (whence comes the title of Wizards Foot) and his head is covered with the evil and reversed Pentagram. As his hmds bear the torch and the horn, the symbol of Fire and Water, so does his form unite the Earth in his hairy and bestial aspect and the Air in his bat-like wings Thus he represents the gross and materialised Elemenal Forces of Nature; and the whole would be an evil symbol, were it not for the Pentagram of Light above his head which regulates and guides his movements. He is the eternal renewer of all changing forms of Creation

in Conformity with the Law of the All-Powerful One (Blessed be He) which controlling law is typifed by the controlling force of the Pentagram of Light surmounting the whole. This Key an emblem of tremendous force; many and universal are its mysteries. 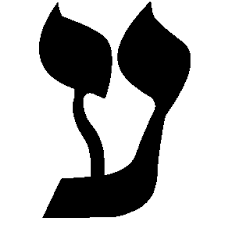 Ayn or O has the value of 70 in the Hebrew alphabet.

The exalted Phallus. The Secret of generation is Death.

Ayin, an Eye, refers to the meatus. This explains the application of Capricornus to the 15th ATU. The shape may suggest the two eyes and the nose. 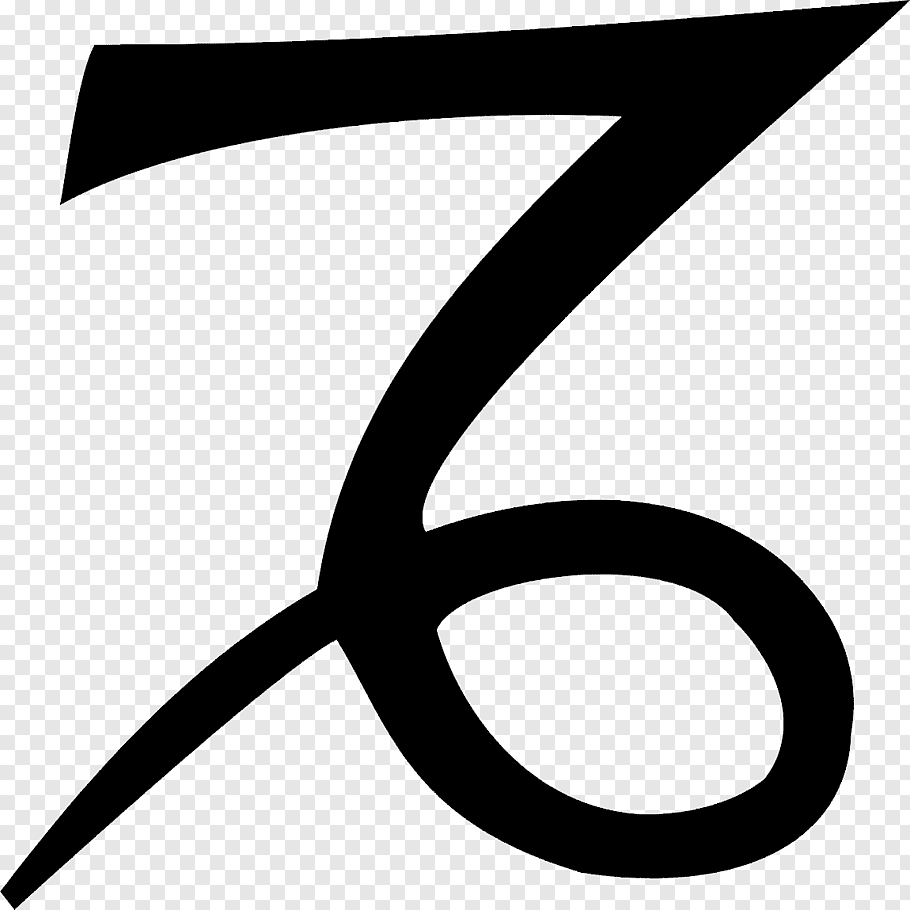 Capricorn is the 10th sign of the Zodiac ruled by Saturn. It is Cardinal Earth.

The Twenty-sixth Path is called the Renovating Intelligence, because God
– blessed be He – renews by it, all the changing things which are
renewed by the creation of the world.

Deities associated with The Devil

Set, see ATU 15. Capricornus is the House of the Sun at the extreme southern declination.

Vesta is here attributed because of Capricorn being the secret flame.

Flora and Fauna of The Devil

“the uncleanly flux of a cat,” corresponds to Musk as Binah to Chokmah, its origin being feminine.

The orchitic origin of Musk indicates Chokmah. This is the male aspect of the Work.

The reference is to the letter Ayn, the Eye. The Black Diamond reminds us of the  pupil of the eye, and this eye is the eye of the Most Holy Ancient One; Kether. Capricon is the zenith of the Zodiac as Kether is of the Sephiroth.

The Ass and the Oyster are traditionally sacred to Priapus.

Capricornus means Goat. An animal is sacred to Capricorn in respect of
its ambition, actual or symbolic. It is the leaping of the Goat and its
fondness for high and barren mountains which connect it with Capricorn,
the sign which represents the zenith in the Zodiac. Not that the sexual
instinct should primarily be regarded as indicative of the ambition or
aspiration of the animal to higher things.

Indian Hemp is tough and fibrous, thus used for making ropes, related to The Devil

Orchis Root is connected with the Cult of Pan.

Thistle is hard, stubborn and spikey, relating to The Devil

Magical Attributions of The Devil

The Witches’ Sabbath, The Evil Eye

Colour Scales of The Devil

The colour combines Chokmah and Binah, and is very dark. The Great Attainment is symbolized  by the marriage. 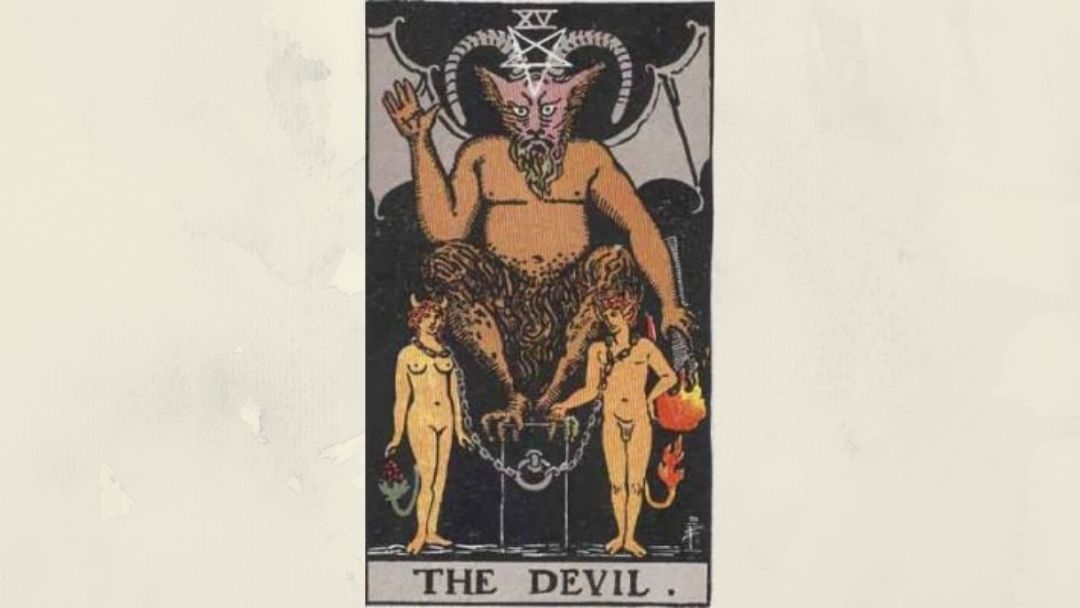 Ravage, violence, vehemence, extraordinary efforts, force, fatality; that which is predestined but is not for this reason evil.