A goodly personage has feasted to his heart’s content, and abundant refreshment of wine is on the arched counter behind him, seeming to indicate that the future is also assured. The picture offers the material side only, but there are other aspects.

Concord, contentment, physical bien-être; also victory, success, advantage; satisfaction for the Querent or person for whom the consultation is made.

Truth, loyalty, liberty; but the readings vary and include mistakes, imperfections, etc.

Many of the addictions are very suggestive of the influence of the Water on the house of the heart, the Fifth; and we can only say, that they are fairly exact and to the point. The card must signify the realisation of hopes and wishes lying in one’s own power or destiny, making one enjoy the fulness of life, and adopting the philosophy of Epicurus. There is no evil in it. It shows goodness and a jovial disposition, not only contentment and happiness in one’s self, but also, owing to Leo-influence, the love of bestowing hospitality on other people and helping them.

P.S.–In the more profane branch of divination this card is called the ‘nine-months-card,’ owing to the belief that it means pregnancy and expectance of childbirth. The latter is significant of the fifth house, the former confirms our idea, that the cups have to do with months in time.

Here the winged disk is stable in flight, and comes straight ahead, in contrast to the instability suggested by the four wings on the preceding card. This is the same as the Nine of Hearts, and is the traditional wish- card. It owes this significance to the original Tarot meanings.

Second decanate of Pisces, March 1st to 10th, under the rulership of the Moon. 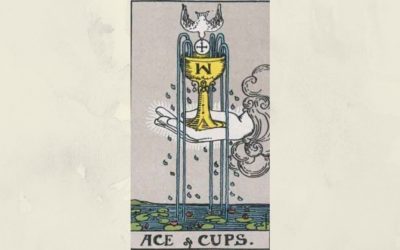