The Four Fours are in Chesed, and they represent stability and order.

A mighty crowned and enthroned king.

The name AL is used in many senses. Its deepest sense is given by The Book of the Law. The excuse for writing it here is that 4 represents Jupiter, the highest possible  manifestation of Deity.

The Sphere of Jupiter: Tzedeq means righteousness; the inexorable law of Jupiter. The connection of this with the number 4 depends on the aspect of 4 as the square of 2, the limitation of the Dyad further fixed by self-multiplication, the introduction of a new dimension. 4 is thus a number of rigidity or materiality. Hence its ideal quality is inexorable righteousness.

Yet, in connection with this, remember that Chesed means Mercy and 4 is Daleth, the letter of Venus, Love. Consideration of this is very helpful in understanding the way in which a Sephirah combines widely diverse ideas.

Amoun as the Father

Libitina is connected with the amniotic fluid.

The Olive is attributed to Jupiter because of its softness and richness. Its colour furthermore suggests that of the watery part of Malkuth in the Queen Scale.

The Opium Poppy is Jupiterian as giving relief from pain, quiet, and olympian detachment.

The Crook is the weapon of Chesed – Mercy as opposed to the scourge of Geburah.

The Sceptre is the weapon of authority referring to Jupiter (Gedulah – magnificence).

The Wand is the reflection of the Lingam  as the paternal power of Chesed in the solidification of the male creative energy of Chokmah.

The Vision of Love

The deep violet is episcopal. It combines 2 and 3 , a bishop being the manifestation of heavenly or starry existence manifested through the principle of blood or animal life.

Deep Azure, flecked Yellow. Deep azure represents Jupiter and Water. It is flecked with yellow. This represents religious meditation; the yellow flecks are the first marks of ecstasy.

The Fourth Path is named Cohesive, or Receptacular Intelligence, and is so called because it contains all the holy powers, and from it emanate all the spiritual virtues with the most exalted essences: they emanate one from the other by the power of the primordial emanation, The Highest Crown.

Art divinatory meanings When strong, Art indicates balance and harmony in the life of the client. He is able to more than cope with what is going on around him and things run smoothly. There is a powerful aspirational component, in that upward desires are likely to... 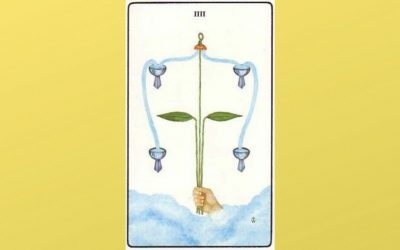 Golden Dawn Title: Lord of Blended Pleasure, Lord of Luxury Divinatory meanings of 4 of Cups The gentle care of the mother; a desire to return to safe haven; a desire to nurture; over-protectiveness imposing unnecessary limits. MacGregor Mathers Ennui, Displeasure,...