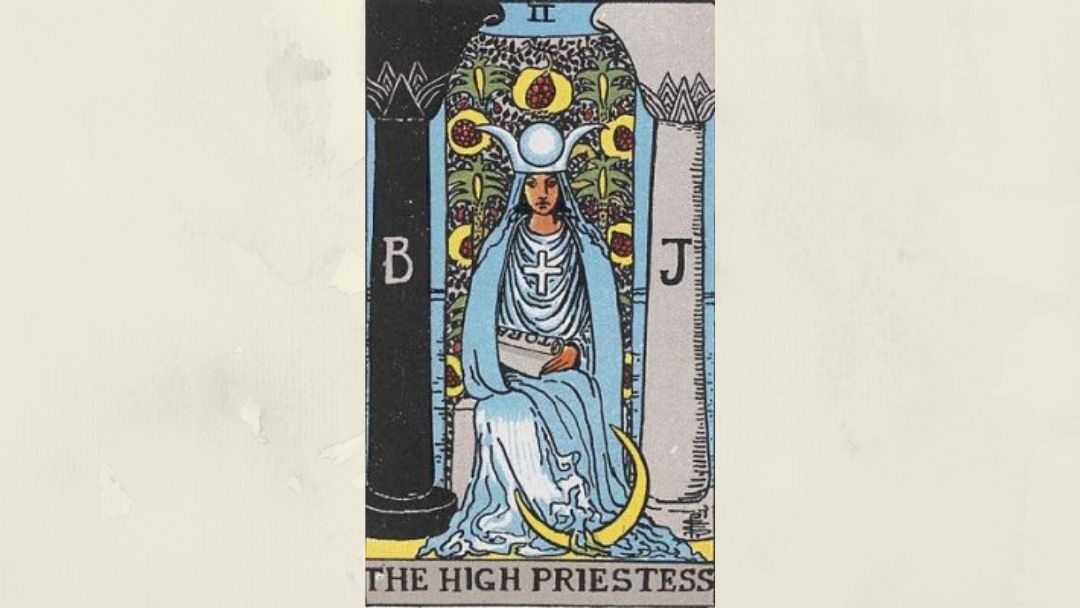 Keywords for The High Priestess

Secrets, mystery, the future as yet unrevealed; the woman who interests the Querent, if male; the Querent herself, if female; silence, tenacity; mystery, wisdom, science.

Reversed keywords for the High Priestess

She has the lunar crescent at her feet, a horned diadem on her head, with a globe in the middle place, and a large solar cross on her breast. The scroll in her hands is inscribed with the word Tora, signifying the Greater Law, the Secret Law and the second sense of the Word. It is partly covered by her mantle, to shew that some things are implied and some spoken. She is seated between the white and black pillars – J. and B. – of the mystic Temple, and the veil of the Temple is behind her: it is embroidered with palms and pomegranates. The vestments are flowing and gauzy, and the mantle suggests light – a shimmering radiance. She has been called occult Science on the threshold of the Sanctuary of Isis, but she is really the Secret Church, the House which is of God and man. She represents also the Second Marriage of the Prince who is no longer of this world; she is the spiritual Bride and Mother, the daughter of the stars and the Higher Garden of Eden. She is, in fine, the Queen of the borrowed light, but this is the light of all. She is the Moon nourished by the milk of the Supernal Mother.

In a manner, she is also the Supernal Mother herself – that is to say, she is the bright reflection. It is in this sense of reflection that her truest and highest name in symbolism is Shekinah – the co-habiting glory. According to Kabalism, there is a Shekinah both above and below. In the superior world it is called Binah, the Supernal Understanding which reflects to the emanations that are beneath. In the lower world it is Malkuth – that world being, for this purpose, understood as a blessed Kingdom that with which it is made blessed being the Indwelling Glory. Mystically speaking, the Shekinah is the Spiritual Bride of the just man, and when he reads the Law she gives the Divine meaning. There are some respects in which this card is the highest and holiest of the Greater Arcana.

It must be remembered in thefirst place that Elohim is a title of Shekinah and also is Adoni, in which sense-but presumably for us in manifestation – she is called Mirror of Jehovah. Like the First matter of the Greut Work in Alchemy, Shekinah is almost myrionymous in respect of her designations, but almost without exception, the ascriptions are feminine. She is is the Daughter of the King; she is now betrothed, the Bride and Mother and again she is the sister in relation to the world of man at large. There is a sense also in which this daughter of God- or becomes-the Mother of Man. In respect of the manifest universe, she is the architect of worlds, acting in virtue of the Word uttered by God in creation. In respect of the myth of Paradise, the Shekinah is the Eden which is above, whence the river of life flows forth that waters the garden below and this is also the Shekinah as she is conceived in external things – or Bride, Daughter and Sister in tlu world below,

Considered in her Divine Womanhood, in the world of transcendence, she is the beloved who ascends towards the Heavenly Spouse and she is Matrona who unites with the King, for perfection of the Diviner male is in the Divine Female.

RWS symbolism on The High Priestess

The keys in the Knapp version repeat Oswald Wirth’s variation from the older symbolism. They do not belong properly to this card. The lunar crescent surmounting her crown identifies La Papesse as the Tarot symbol of the Moon. The symbol of Mercury on her breast suggests that she reflects the power of the preceding Key, just as the subconscious mind, whose principal power is memory, is responsive and reflective in all its activities, which are controlled from the Mercurial, or self-conscious, level.

The divinatory meanings are the same as those of the Moon in astrology: Fluctuation, reaction, change, alternation, increase and decrease, instability, secrets, things hidden, the unrevealed future, Whether these meanings are good or evil depends altogether upon the dignity of the card in the divinatory layout.

The Woman Who Most Interests the Querent, if Male Nature, Rest, Peace and Quiet, Retreat, A Withdrawn Life, Alone, Retirement. Temple of Heat, Silence, Tenacity.

The second stage in macrocosmic evolution is the polarity of the omnipotent might of Self, omnipotent possibility of the field of manifestation, universal passive richness, the Kamaduk or Most Beloved Wish-Cow of the Hindus. This macrocosmic field is the Temple of the Great Magician or Architect, in potency at least. It is the Bull, Taurus, of astrology, the house of sound, art, faith and richness. To speak truly, it is not so much sound as the principle of the soundbox, sound itself having its origin in the next step. Therefore Papus may well compare this card with the hieroglyphic meaning of the Hebrew letter Beth, which relates to “the mouth of man as the organ of speech.” But it is not “God the Son” as he says elsewhere. It might be called ‘God the Woman,’ the Divine Mother, the ‘Eternal Feminine.’ As the passive richness of the Universe awaiting him that will be able to see it and appreciate it, this principle may well be symbolised by the image of the High Priestess, sitting in an attitude of waiting, between the pillars of the Temple, B and J, standing for the Two, from which will spring the worlds of spirit and of matter. Being Supreme Objectivity, it is the symbol of receiving, of possessing, of cult and adoration. It symbolises womanhood in general, as the first card symbolised manhood. 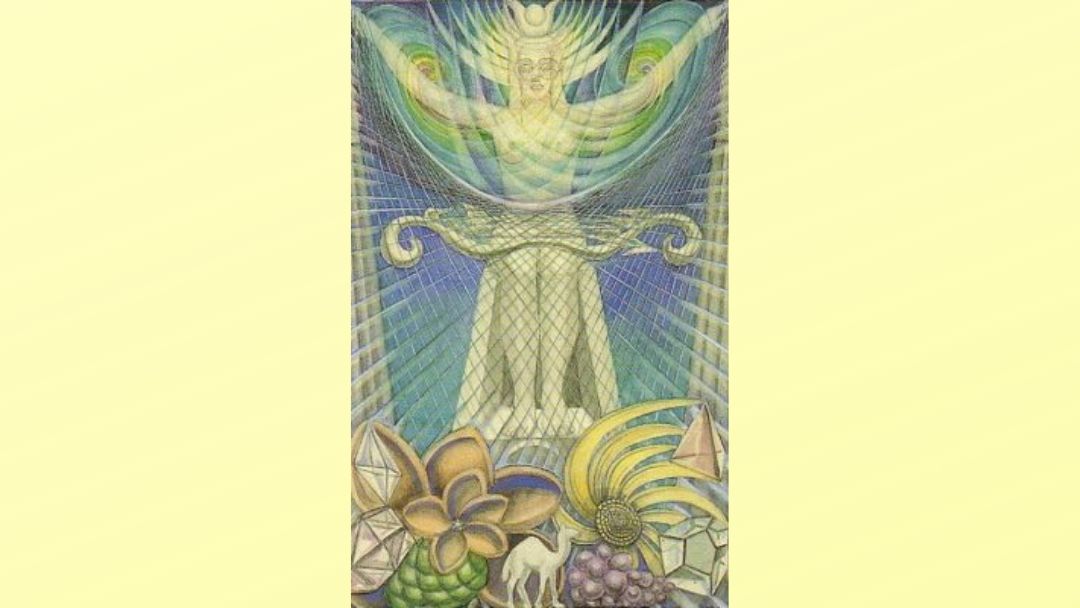 2 The High Priestess – Book of Thoth 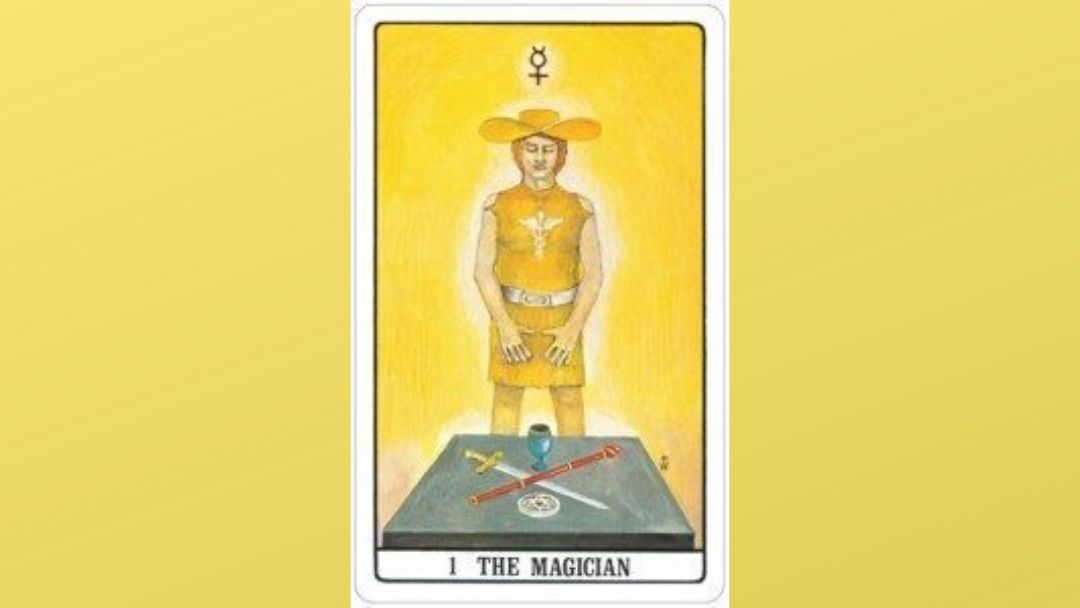