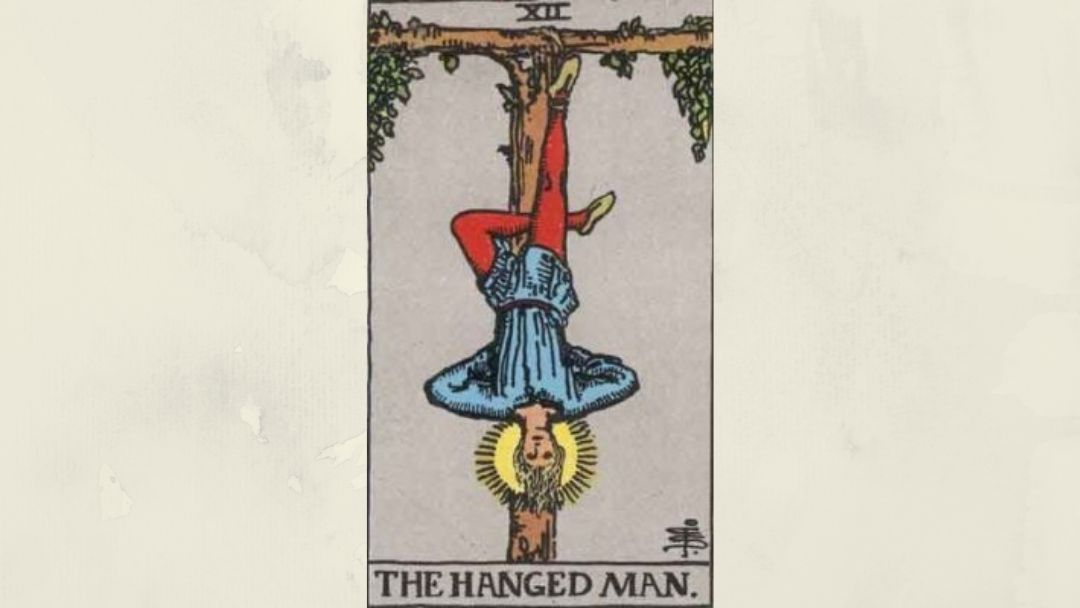 Rider-Waite symbolism of The Hanged Man

There are no obvious symbols.

The gallows from which he is suspended forms a Tau cross, while the figure – from the position of the legs – forms a fylfot cross. There is a nimbus about the head of the seeming martyr. It should be noted (1) that the tree of sacrifice is living wood, with leaves thereon; (2) that the face expresses deep entrancement, not suffering; (3) that the figure, as a whole, suggests life in suspension, but life and not death. It is a card of profound significance, but all the significance is veiled. One of his editors suggests that Éliphas Lévi did not know the meaning, which is unquestionable nor did the editor himself. It has been called falsely a card of martyrdom, a card a of prudence, a card of the Great Work, a card of duty; but we may exhaust all published interpretations and find only vanity. I will say very simply on my own part that it expresses the relation, in one of its aspects, between the Divine and the Universe.

He who can understand that the story of his higher nature is imbedded in this symbolism will receive intimations concerning a great awakening that is possible, and will know that after the sacred Mystery of Death there is a glorious Mystery of Resurrection.

The letter corresponding is Mem, to which are attributed the element of Water and the planet Neptune.

In divination, much depends on the nature of the question whenever this card appears in a layout. If the question is concerned with spiritual matters, the Hanged Man represents wisdom, but a wisdom that is just the reverse of what the world commonly accepts. The card also stands for surrender to the inevitable, but in spiritual things this is surrender to the spiritual perception of universal laws, while in material affairs it is involuntary submission to the force of circumstances. In ordinary material affairs Key 12 is a symbol of reverses and losses, of suffering and sacrifice. But much depends upon its position in a layout, and upon whether or not it is well or Ill-dignified.

This twelfth sign of house, closing the cycle of the zodiac, means loss to the outer world, solution, handing over the results of one cycle to the following one, whence comes the meaning of treachery in common astrology. This house contains the things which we have not yet mastered and those whom we have failed to understand or who have failed to understand us. So either this remains for the next cycle, or it will tempt us to waste our last forces. In the eyes of the world it is the sign of waste, spoil, mishap. Viewed from the other side it is the sign of the Golem, in which the outer world loses its importance or even reality, and the consciousness is opened to inner truth. This is the reversing of consciousness, which makes things change their significance in such a way that they appear to turn upside down: the world is now viewed from the other side. And this is the significance of the hanged man.’

“Man”. The Pain of the higher consciousness bound by the limitations of the body and mind. Superman in the separate man.