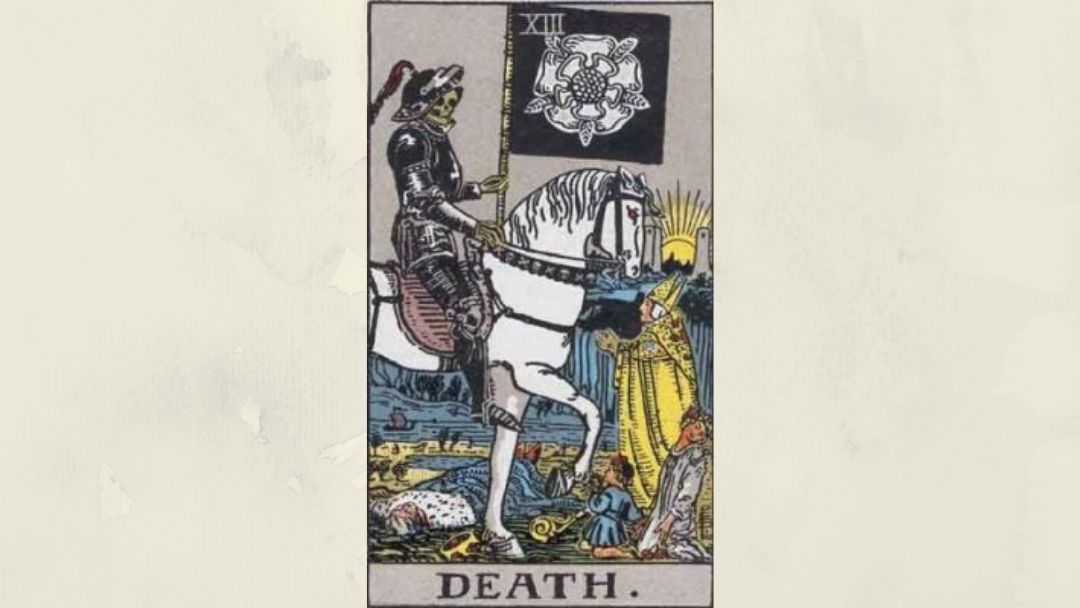 End, mortality, destruction, corruption; also for a man, the loss of a benefactor; for a woman, many contrarieties; for a maid, failure of marriage projects.

The veil or mask of life is perpetuated in change, transformation and passage from lower to higher, and this is more fitly represented in the rectified Tarot by one of the apocalyptic visions than by the crude notion of the reaping skeleton. Behind it lies the whole world of ascent in the spirit. The mysterious horseman moves slowly, bearing a black banner emblazoned with the Mystic Rose, which signifies life. Between two pillars on the verge of the horizon there shines the sun of immortality. The horseman carries no visible weapon, but king and child and maiden fall before him, while a prelate with clasped hands awaits his end.

Corresponds, through the letter Nun, to the zodiacal sign Scorpio. Thus it is more or less related to the matters which astrology connects with the eight house of a horoscope, such as death, legacies, the affairs of the dead, and so on. Sometimes it has definite relation to necromancy and spiritualism.

Time, age. Sudden change, wholly unexpected. (For good or ill, according to the dignity of the card in a layout). In material matters, as a rule, it is a symbol of death, either the death of persons, or the failure of a project.

The picture speaks for itself — as indeed most of them do — but still there is more in it than we might suppose at first sight. Beyond all doubt it is a sort of allegorical representation of Father Chronos, Time, who, while creating, consumes his own children, and was very often pictured as a warning of death or a remembrance of mortality. But on the other hand Time marks the beginning, and birth is not less under his government than death. The ancient edition of this card shows the figure harvesting heads and limbs of human bodies upon a field. This may be an expression of an old superstition, which said that those limbs with which man sinned would grow out of his grave. Probably a distorted teaching of the Law of Karma or cosmic reaction, which is also ruled by Saturn, at least in the execution. And in this function he is the old God of Israel, whose law was “an eye for an eye and a tooth for a tooth.”

Another aspect of Life. Going away in order to come back at the same time. Completion of the circle.