The Sevens show a degradation of the element – things get messy. Netzach is related to Venus

YHVH TzBAVTh. Yehovah Tzabaoth is one of the principle names of the Demiurge expressed in multiplicity and positive action (Hosts).

The Raven pertains to Netzach because of the qliphotic connection in Column 8. All carrion birds may be attributed here, because of their connection with Victory. Note that the path of Scorpio connects Tipareth with Netzach. the idea of Venus is intimately connected with that of death, for death is in many important senses a part of love.

Lynx is traditional to Venus. See Eliphas Levi’s design of the pantomorphous Lynx.

The Laurel is included because a wreath of leaves is a symbol of victory.

The Rose has always been a special flower of Venus.

Amber represents the electric voluptuousness of Aphrodite. It suggests the tint of the skin of those women who are most enthusiastically consecrated to Venus.

Red Sandal is Venusian intuitively by its smell, an sensibly by its colour. The attribution is further guaranteed by the usefulness of its oil as a specific of gonorrhoea.

Civet, however, is much more strongly sexual than Rose, but this implies a more intense element of spirituality. The student must eliminate completely from his mind any idea that sex is naturally gross. On the contrary, even the lowest manifestations of it in its pure form are less material than such ideas as are represented by Rose. Demonic, not material, developments follow the degradation of the instinct.

The sensuous seductiveness of Benzoin is unmistakeable.

The Girdle is the traditional weapon of Venus. It represents the ornament of beauty. When it is untied it can be used to bind and blindfold the candidate. It thus represents the power of fascination by love.

The Lamp carried in the hand pertains to Netzach because Love must be enkindled by the magician. It throws light as required on particular objects. This Lamp must in no wise be confused with that of Kether.

The Vision of the Beauty Triumphant

The Seventh Path is the Occult Intelligence, because it is the Refulgent Splendour of all the Intellectual virtues which are perceived by the eyes of intellect, and by the contemplation of faith.

Olive flecked Gold. There seems a possible reference to Semele; and the general idea is that Netzach has been brought  to a quiet harmonious tone and is receiving the influence of Tipareth.

Dogma, tradition and patriarchal society comes to mind when the Hierophant appears. At its best, he is a benevolent teacher, kindly and understanding. The Papal tradition is the model - and we know they still have not really forgiven Galileo for suggesting that the... 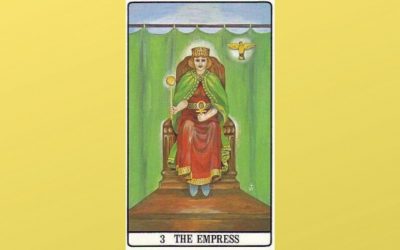