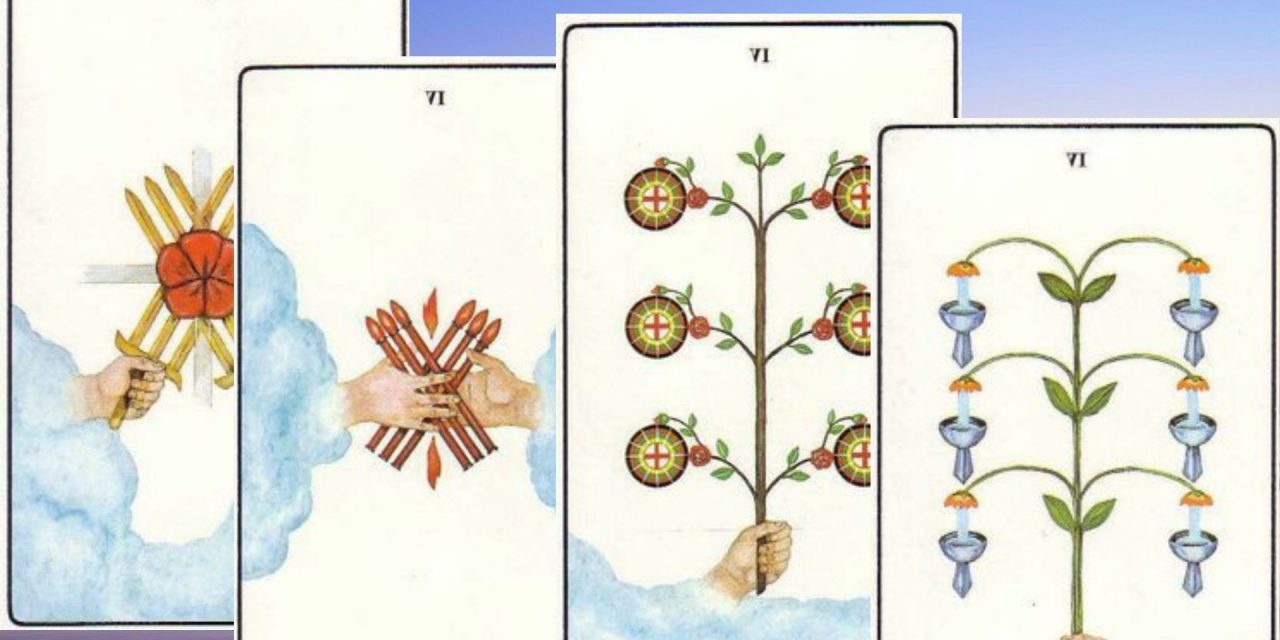 The Sixes are in Tipareth, which connects to Kether - a positive sign of self-knowledge.

"A majestic king, a child, a crucified god"

Yehovah Eloah va-Daath. The reference is to Tipareth as the child of Chokmah and Binah. Daath (their first child) having failed to find a place on the Tree.

Sphere of Sol, Shemesh, Hebrew for the Sun

The Sixth Path is called the Intelligence of the Mediating Influence, because in it are multiplied the influxes of the emanations; for it causes that affluence to flow into all the reservoirs of the Blessings, with which these themselves are united.

The prototype of man.

The inspirer of Harmony and Beauty

The God of the Sun and male beauty.

Goddess of the Dawn, rose-pink of Tipareth.

The inspirer of Harmony and Beauty

Flora and Fauna associated with the Sixes Minor Arcana

The typical animal of Sol.

The Pelican represents the Redeemer feeding its children with its own blood, and for this reason it has been chosen as the special symbol of the Brethren of the R & C.

The Phoenix, on account of it symbolism of the 5=6 Grade of Adeptus Minor

The Vine is sacred to Dionysus

The Bay is the plant sacred to Apollo.

The Acacia is placed here as a symbol of resurrection as in the rituals of Free Masonry.

The Ash tree  is one of the most important of the solar trees; the wood is firm and elastic. The World-Ash represents the microcosm in legend. Yggdrasil is itself an Ash. Aswata, the World-Fig, should also be attributed here as the Tree itself in the microcosm.

Gorse, the sacred flower of the A. A. was chosen as their heraldic emblem to be a symbol of the Great Work. Its appearance is that of the Sun in full blaze, and suggests the burning bush of Moses. Its branches are exceedingly firm, as should be the Will of the Adept, and they are covered with sharp spikes, which symbolize, on the one hand, the phallic energy of the Will and, on the other, the pains which are gladly endured by one who puts forth his hand to pluck this bloom of sunlight splendour. Note that the Great Work is here concentrated in Tipareth, the attainment of the Grade corresponding to which is in fact the critical stage on the path of the Wise.

The Oak is also, and more properly attributed to Tipareth because of it was the sacred tree of the Druids, the representative in the vegetable kingdom of the Sun. Its strength is also taken as harmonious quality in man. Furthermore the Acorn is peculiarly phallic, and this is properly to be attributed to Tipareth because in this case the phallic symbol contains in itself the essence of the being to be reproduced.

The Yellow Diamond suggests the reflection of Kether into Tipareth.

The Topaz is of the gold of the Sun. It is also traditionally associated with Tipareth.

The correctness of this should be intuitively perceived at once by every magician. Olibanum possesses a comprehensive catholic quality such as no other incense can boast.

The Rosy Cross is technically pertinent to Tipareth.

The Lamen represents the symbolic form of the Human Will and consciousness of the magician.

The Vision of the Harmony of Things

Also the Mysteries of the Crucifixion

The rose is that of dawn. The attribution therefore asserts the identity of the Sun and Horus and is thus implicated with the doctrine of the New Aeon.

Gold amber suggests the mellowness of harvest, which is the perfection of the rose-pink of dawn ,the spring of the day.
Prince
← The 4 Sevens - Netzach The 4 Fives - Geburah →