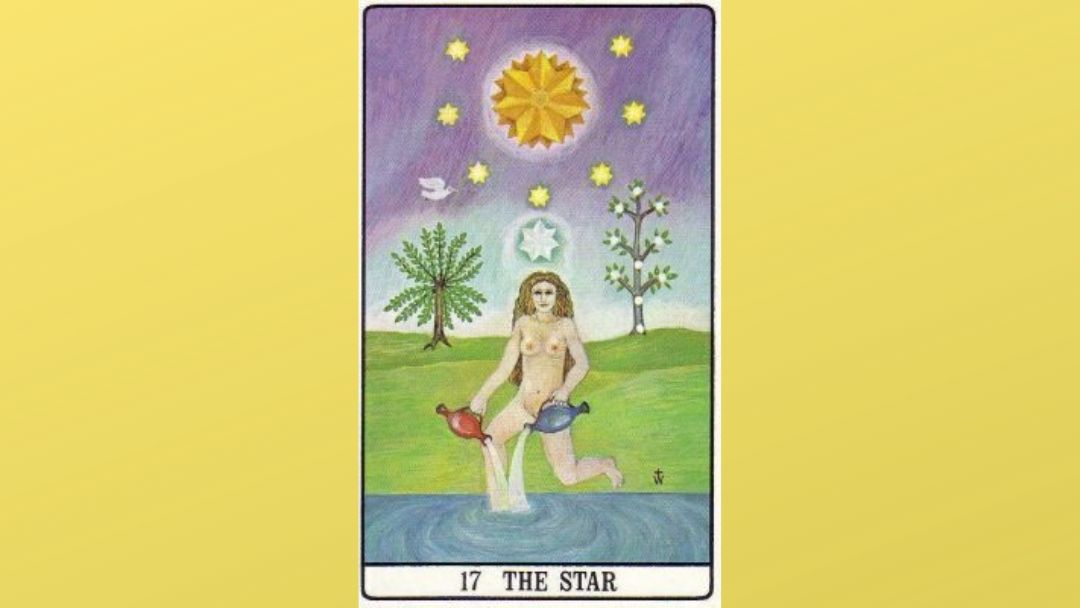 Divinatory meanings of The Star

Hopes not fulfilled, Expectations disappointed or fulfilled in a minor degree.

Daughter of the Firmament, Dweller between the Waters

Golden Dawn description of The Star

The large Star in the centre of the Heavens has seven principal and fourteen secondary rays and this represents the Heptad multiplied by the Triad. This yields twentyone-the number of the Divine Name EYHH whch as you already know, is attached to Kether. In the Egyptian sense, it is Sirius, the Dog-Star, the Star of Isis-Sothis. Around it are the Stars of the Seven Planets each with its sevenfold counter changed operation”. “The nude figure with the Star of the heptagram on her brow is the synthesis of Isis, of Nephthys and of Athor. She also represents the planet Venus through whose sphere the influence of Chesed descends. She is Aima, Tebunah, the Great Supernal Mother-Ainia Elohim, pouring upon the Earth the waters of Creation which unite and form a River at her feet, the River going forth from the Supernal Eden which ever floweth and faileth not. Note well that in this Key she is completely unveiled while in the twenty-first Key she is only partially so”. “The two Urns contain the influences from Chokmah and Binah. On the right springs the Tree of Life and on the left the Tree of Knowledge of Good and Evil whereon the Bird of Hermes alights and therefore does this Key represent the restored World, after the Formless and the Void and the Darkness: The New Adam, the Countenance of the Man which falls in the Sign of Aquarius. And therefore doth the astronomical symbol of this sign represent, as it were, Waves of water: the ripples of that River going forth out of Eden. But, therefore also, it is justly attributed to Air and not to water because it is the Firmament dividing and containing the Waters 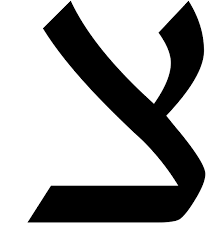 The Husband. Alchemical Sulphur. The Star is the Gate of the Sanctuary

The Wife. Alchemical Salt. The Gate of the Equilibrium of the Universe.

Tzaddi, a Fish-hook, is also an obvious matter of shape. The value of Tzaddi is 90, relating to Aquarius. 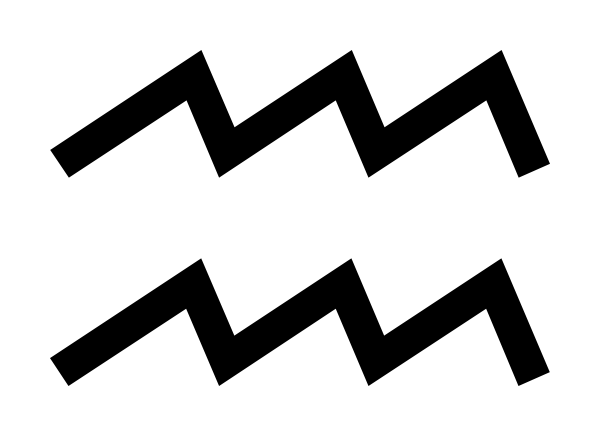 Aquarius is the 11th sign of the zodiac ruled by Saturn. Aquarius is The Star in the Major Arcana and 5, 6 and 7 of Swords in the Minor Arcana.

The Twenty-eighth Path is the Natural Intelligence, and is so called because through it is consummated and perfected the nature of every existent being under the orb of the Sun, in perfection.

Deities associated with The Star

The Cup-bearer, is referred to the Water-carrier

God of the Winds.

Flora and Fauna of the Star

Chalcedony suggests the clouds by its appearance

Artificial glass pertains to Aquarius, as being the work of man, the Kerub of Air.

Magical Attributions of The Star

The Censer or Aspergillus

The Censer carries the perfumes as the clouds carry the distillation of the water  of earth. The Aspergillus similarly sprinkles the lustral waters as the clouds shed rain.

Colour Scales of The Star

Aquarius is the Kerub of the Man; and his perfection is to attain the purity of Kether (white) tinged with the purple or violet vibrations explained above. 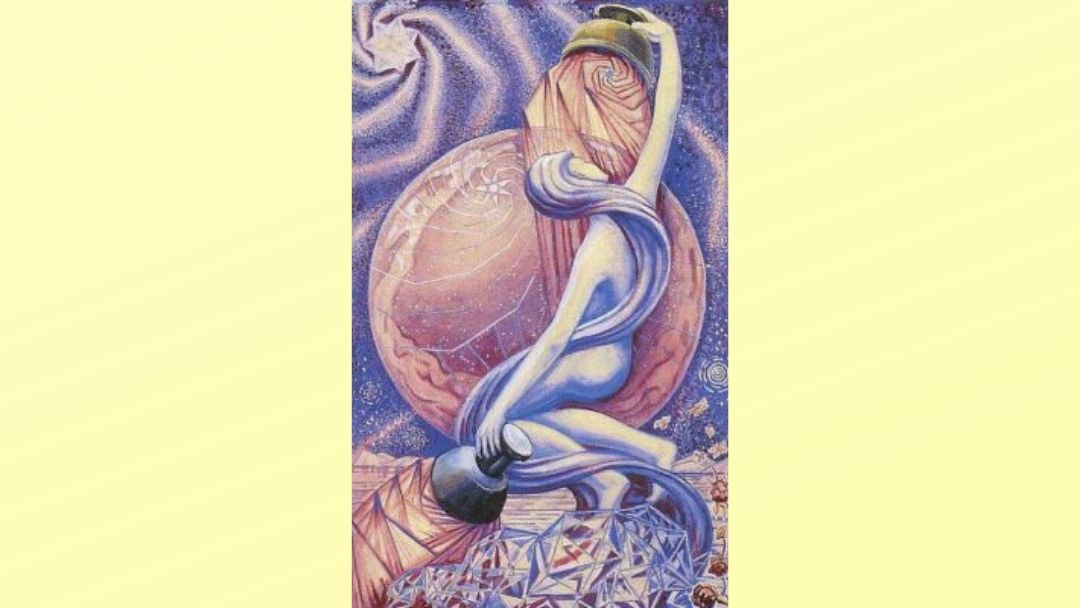 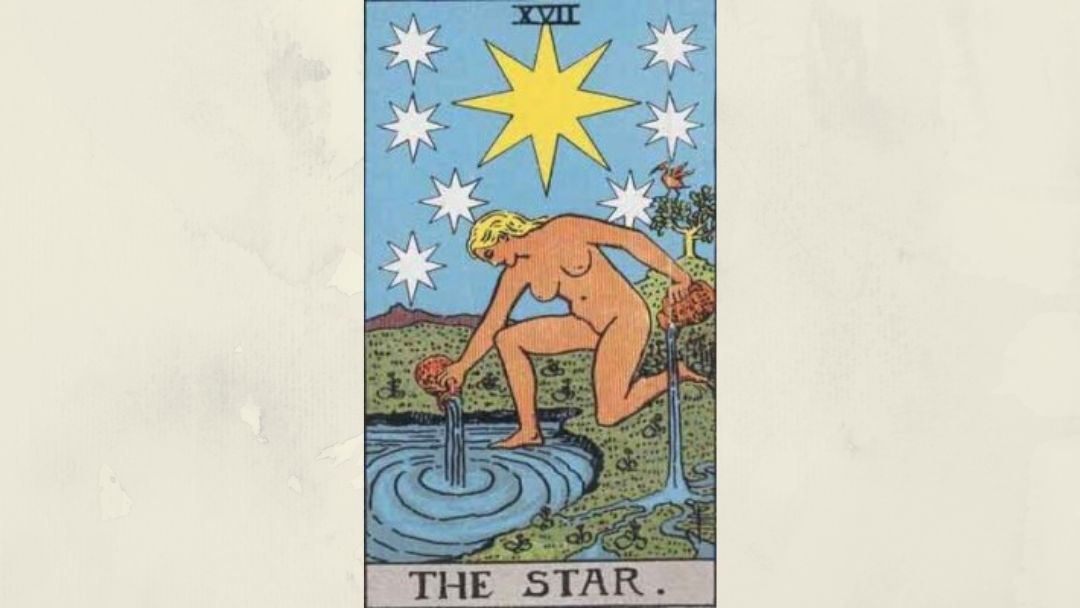